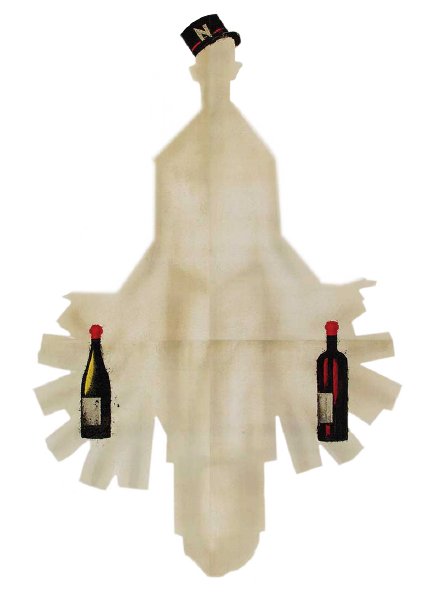 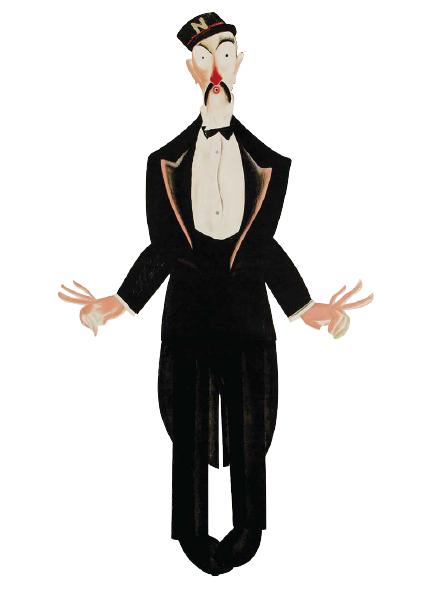 In 1923, Loupot departs for Paris and moves in with Marcelle Vittet in a hotel on Rue de Constantinople. He is thirty-one years old and has a well-established reputation in Switzerland. Those who knew him testify that he was leading a happy life at this time.

It is speculated that this move was in pursuit of employment by Devambez, whose collaborations included work with Leonetto Cappiello, one of the founding fathers of this period. 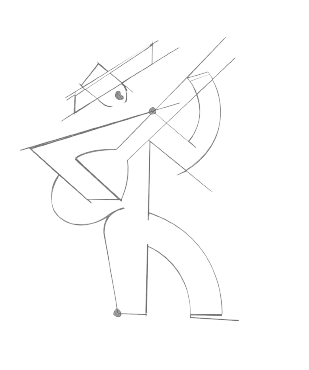 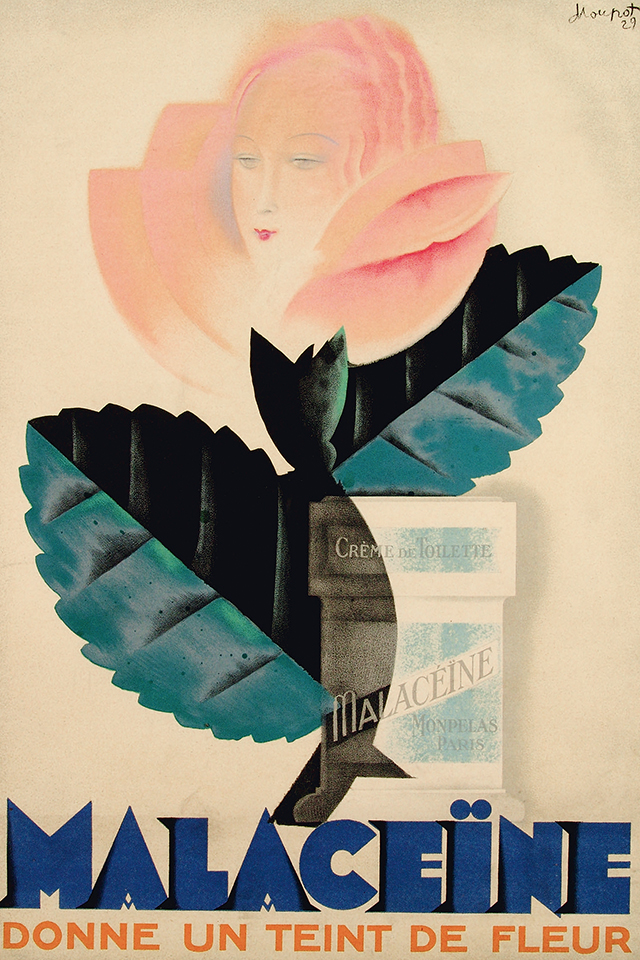 The cream ‘la Malaceïne’ had been advertised in newspapers since the beginning of the twentieth century. In honour of its launch at Monpelas, the perfumery-chemist in Paris, the company commissioned Loupot to create a new type of advertisement for the product. Loupot was given the slogan ‘Malaceïne: for a flowery complexion’ as the starting point for his design. Loupot created a woman made of flowers, the holographic image of a pot, leaf, and female face recalling contemporary effects of photographic superimposition.  For the lettering Loupot used a cobalt blue associated with the brand, but substituted his own typography with that on the packaging. The lettering is the same as that used for Mirus-wood burner and Mira blades, with the addition of a serif that mimicked a rose’s thorns. 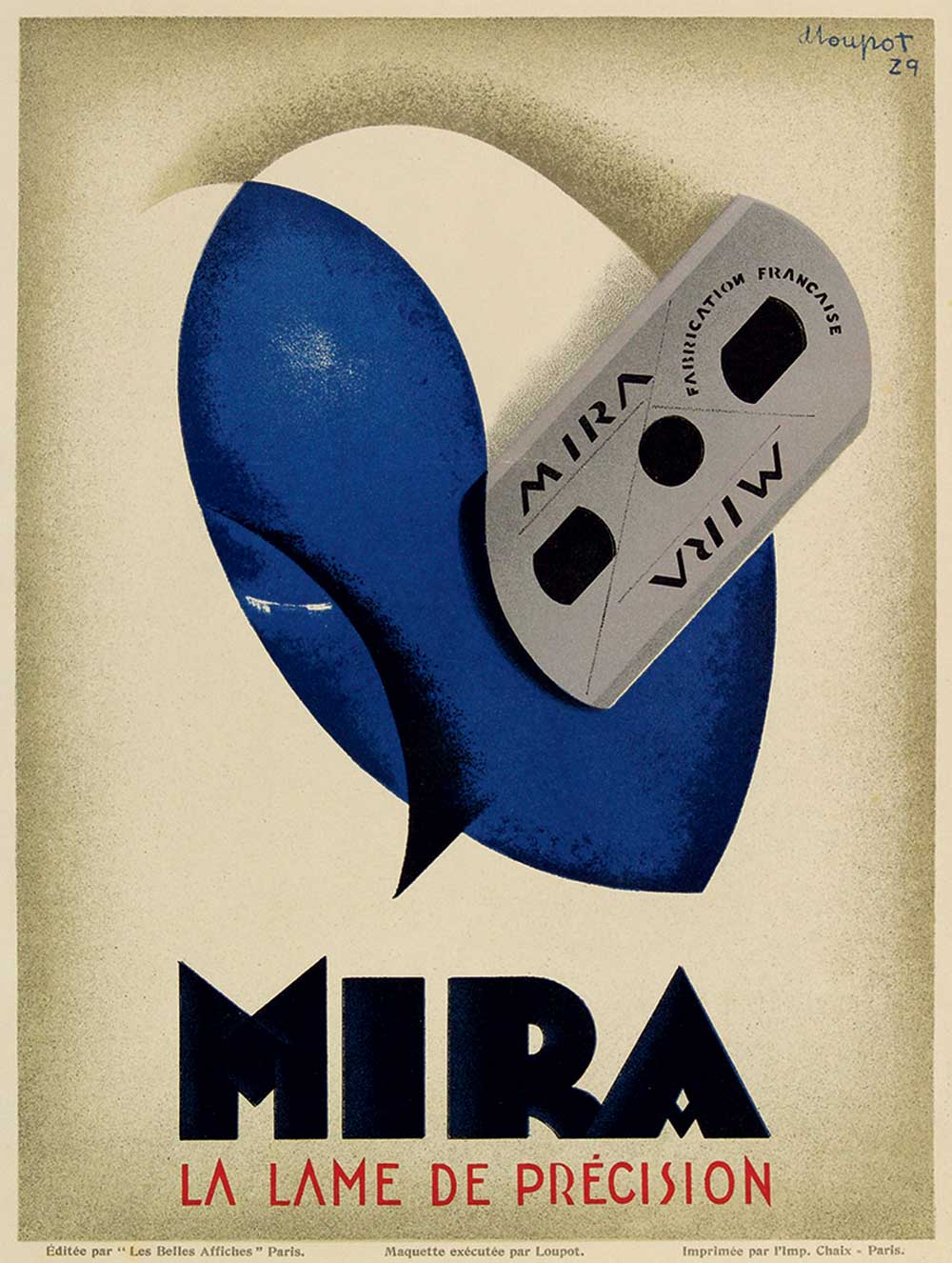 An advert for a razor blade, in which the precision of the object is evoked through the precision of the design and composition. The razor blade is enlarged to be the central focus of the composition. It is shown as if shaving the poster itself, a sweep of clean white across the semi-abstracted blue face. The face is heavily stylised in the manner of a Brancusi sculpture. Eyes are reduced to a white brush of colour, and the elongated nose recalls the experiments with figural abstraction popular in Paris at the time. 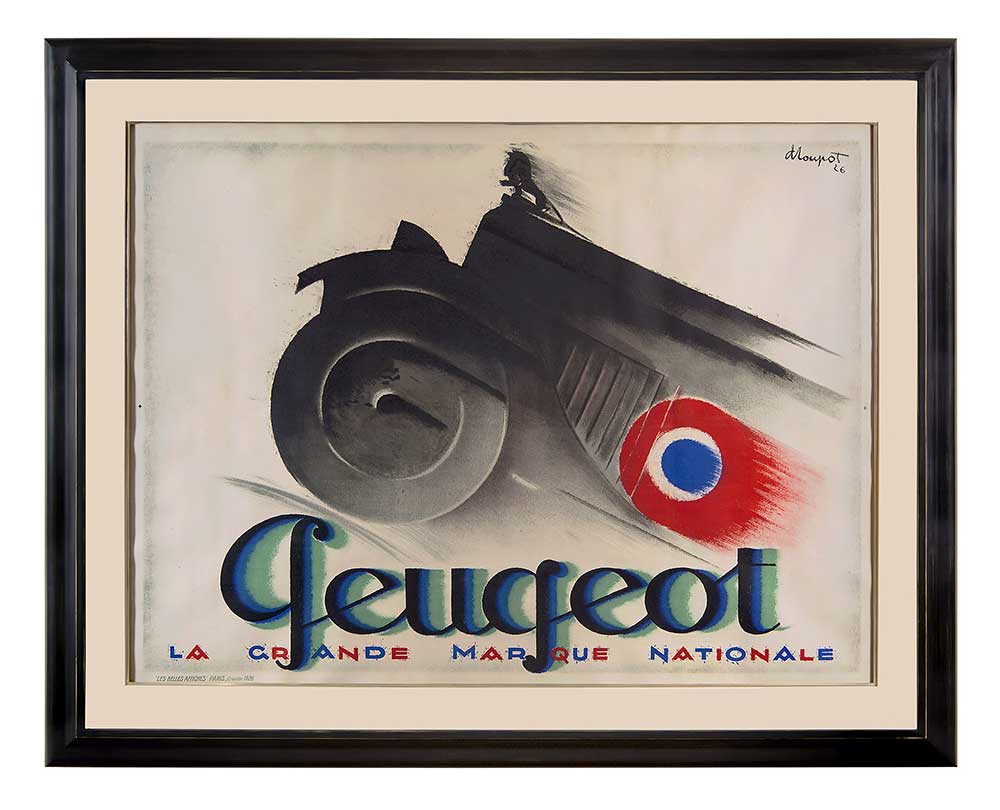 In this design for the French business Peugeot Loupot shows an automobile racing upwards to the left of the sheet. The frame is moved to the foreground. The whole car is flying by: the bonnet, the lion on the radiator cap — emblem of the brand— and a French cockade on the bonnet gills. The colours of the cockade tie in with those of the slogan, itself composed of red and blue letters on a white background. This poster is simple, but effective. 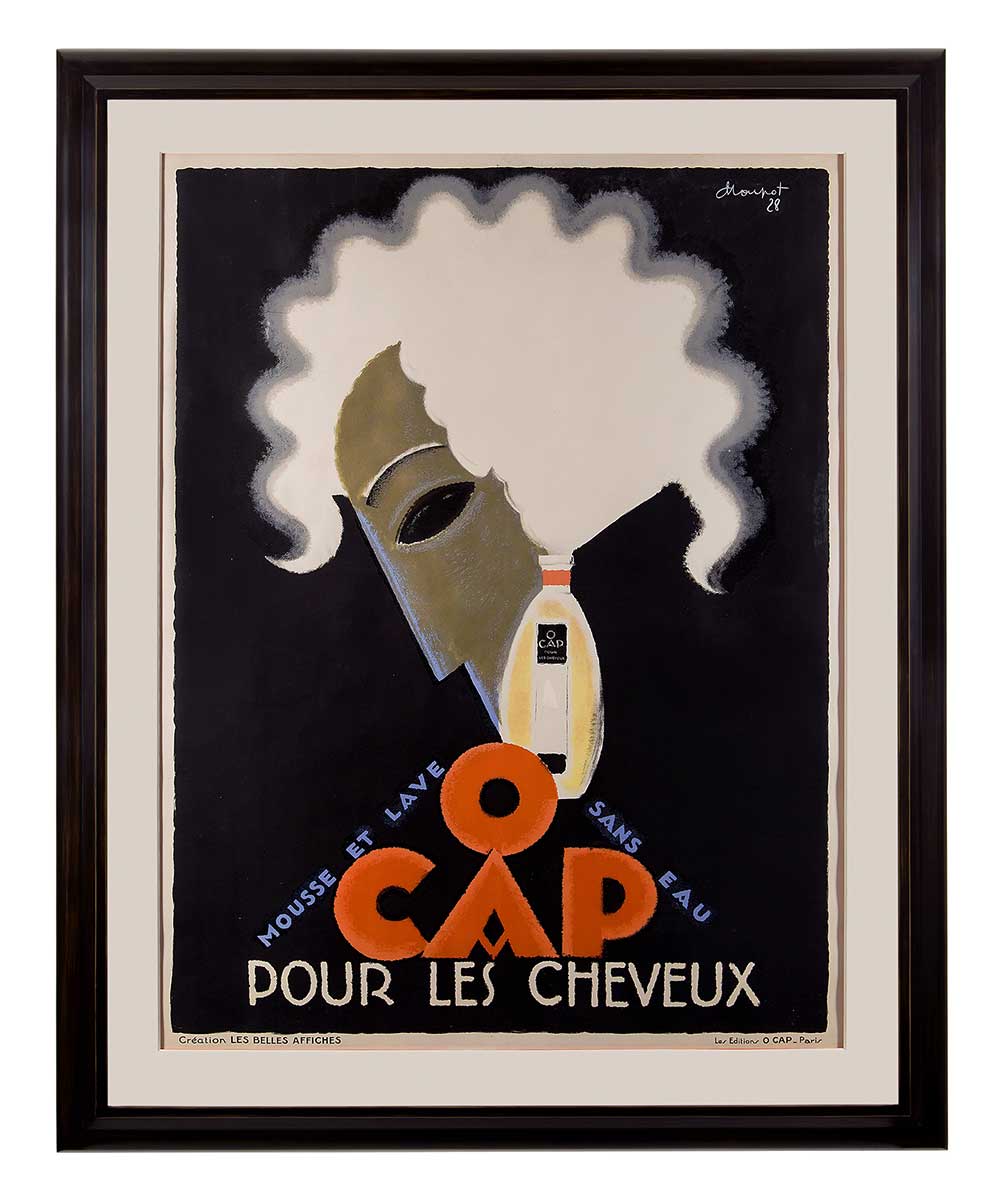 An early commission by Eugène Schuller for the beauty company L’Oréal to advertise an innovative hair product that could foam and wash without water. The lettering of the product forms a triangle centred around the ‘A’ of OCAP, that is mirrored in the miniscule lettering on the bottle behind the letter ‘O’. From the bottle, the product appears to foam out, forming the hair the woman, who is rendered in a characteristically Art Deco style with her stylized features, elongated nose, and linear profile.

For the commercial furniture company Galeries Barbès, Loupot developed a version of the humorous personnages that were frequently used in alcohol advertising at the time. Here the wood used for the furniture has been made into a character, the delivery man who leans on the lettering 55 as a support. Although Loupot always denied any influence of cubism on his work, the play of the woodgrain is reminiscent of the type of cubist joke developed by Pablo Picasso and Georges Braque during their experimentation with collage in the early 1910s. 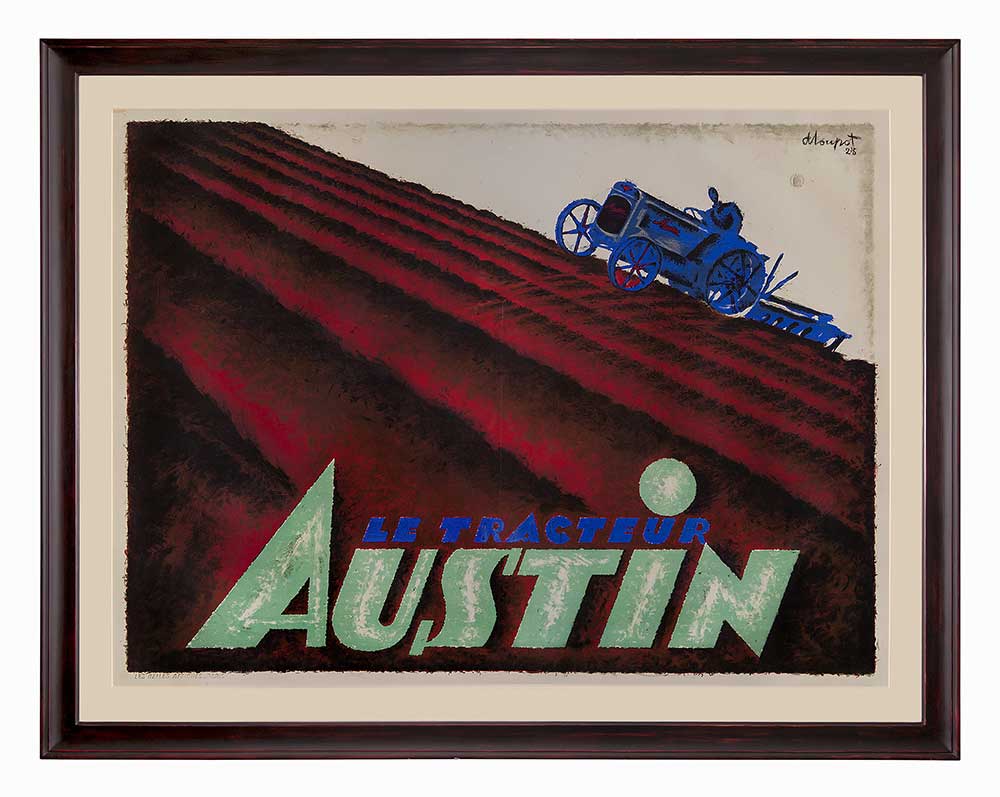 The commissioning of a costly poster artist to advertise a tractor brand might strike a contemporary viewer as a somewhat incongruous choice. It is however indicative of the prestige attached to poster advertising in this period, and the belief in its efficacy for a range of products beyond luxury goods. Rather than focus on the tractor, Loupot created a seemingly endless landscape, with heavily tilled rows of earth. The blue tractor is seen approaching in the background, its beauty complemented by the effect of its productivity created through the diagonal rows of earth and the dynamic contrasting tilt of the letters spelling out the product. wledge of the highly ‘artistic’ style in which he treats his subject. 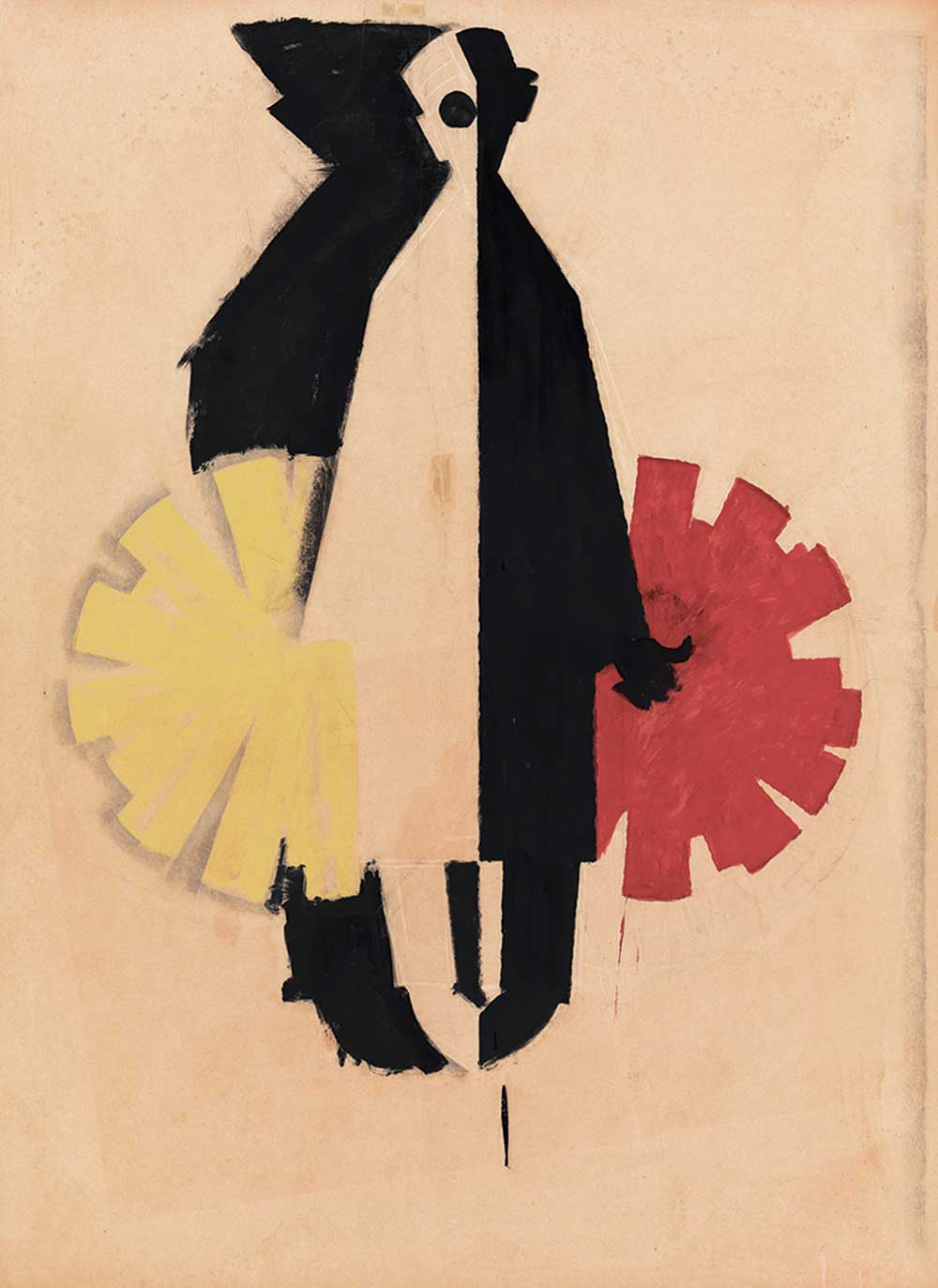 French poster advertising in this period often made use of humorous figures that personified the brand, cultivated by each company to be lovable characters and to make the brand instantly recognisable. Known as personnages, they enjoyed great success in the French imagination. Here, Loupot took up the traditional Nectar figure for the winemerchant Nicolas. Nectar is turned to directly face outwards, and his body is stylised into a geometric outline. This idea of the personnage that can be identified through silhouette online is perhaps an early working out of a formula that would take full fruition in his work for the portly waiters of St-Raphaël.

Loupot simplified this design for a café in Paris to the key visual information required: lettering detailing the brand, and the product itself. The poster is left apparently untouched, like a blank canvas. The observation of a cup of coffee becomes the focus of the composition, and is transformed into something that appeals to the senses, suggesting a quiet moment, and evoking the warmth and aroma of the coffee.

The style of this poster is based on a formula often used by Loupot, whose prototype is seen in the Voisin posters: an almost blank canvas and a minimalist print. 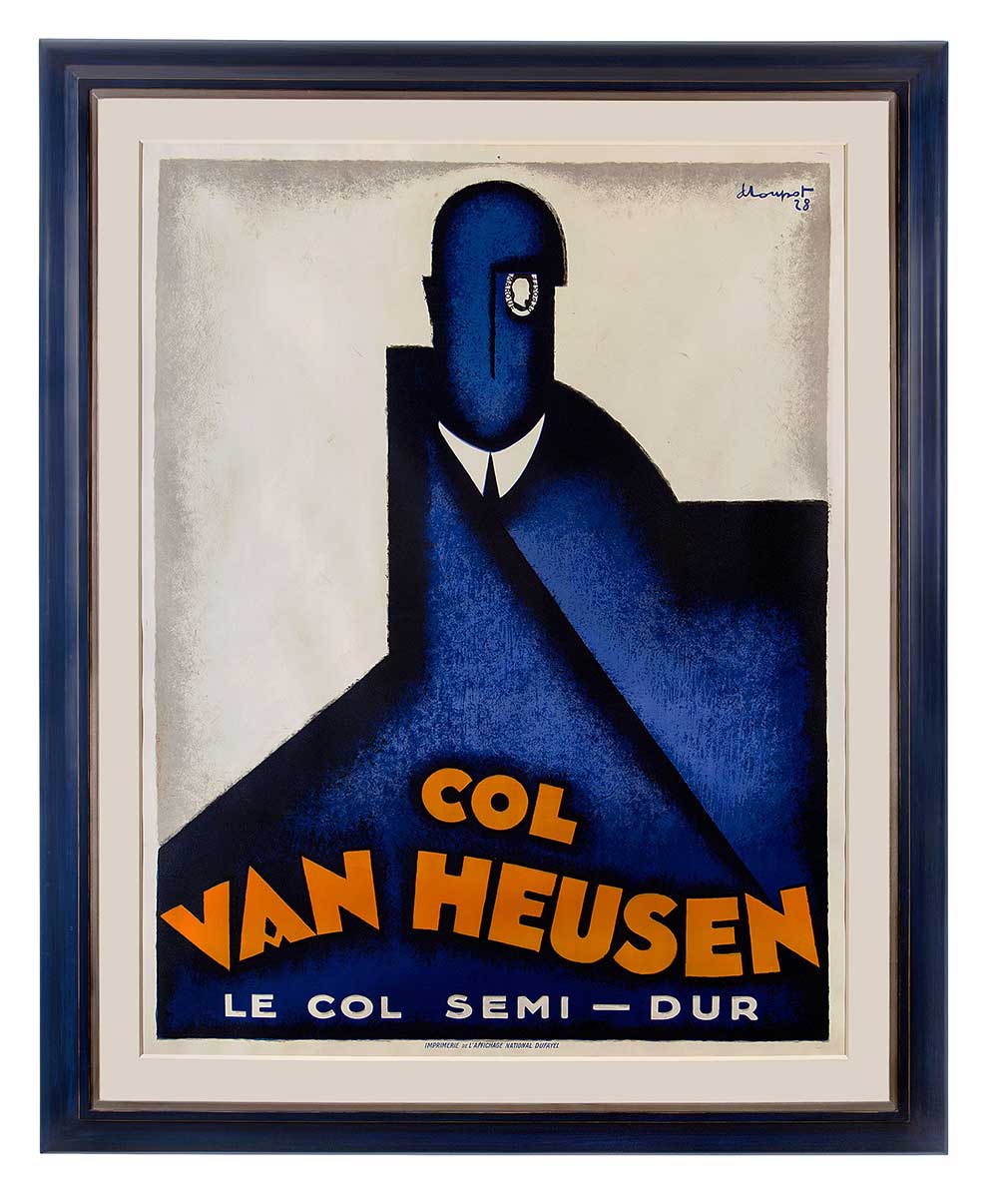 In this advertisement for a semi-stiff shirt collar, the wearer is turned into a mysterious and elegantly elongated figure. His clothing rises in an arc to a stiff peak, falling in a perfectly horizontal line. The bright white collar sits starkly against this blue clothing, picked up again in the lettering describing the product and the single eye of the figure, which has been turned into the brand’s logo of a man seen in profile. A skillfulblend of the many artistic influences Loupot was then drawing from, from Cubismand Expressionism toMannerism, the poster is perhaps the pinnacle of Loupot as adesignerof the Art Deco. 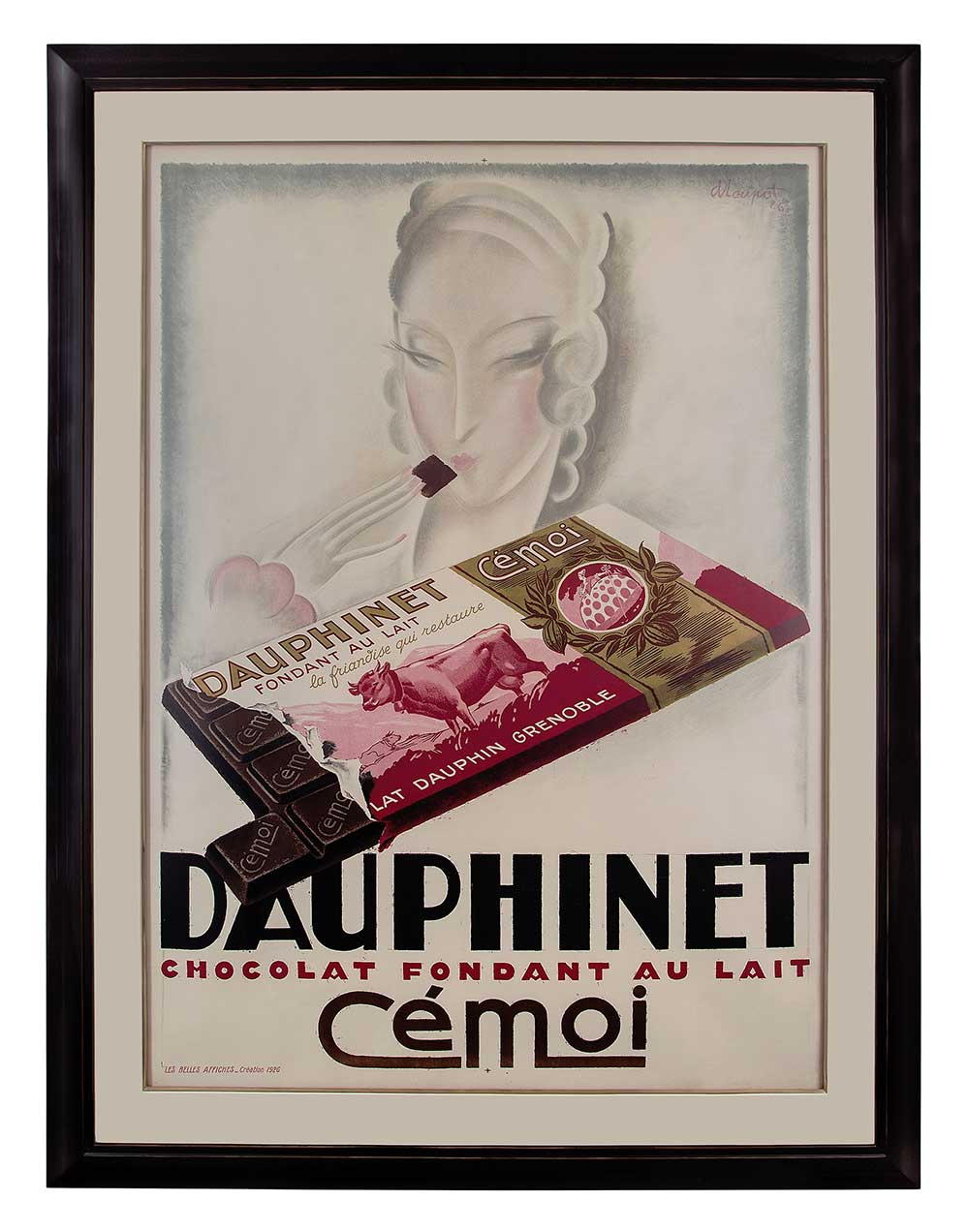 The commissioning details for this piece remain unfortunately unknown. It is possible that Loupot was instructed quite closely as to the design for this piece, since it draws on a realist style new to Loupot’s work, suggestive of the Swiss Sachplakat (poster style). The chocolate bar that the poster advertises takes center stage, against the ephemeral figure of a woman in the top background, who evocatively lifts a piece of chocolate to her mouth. Loupot paid close attention to typography, the lettering constant between chocolate wrapper and that describing the chocolate on the poster. 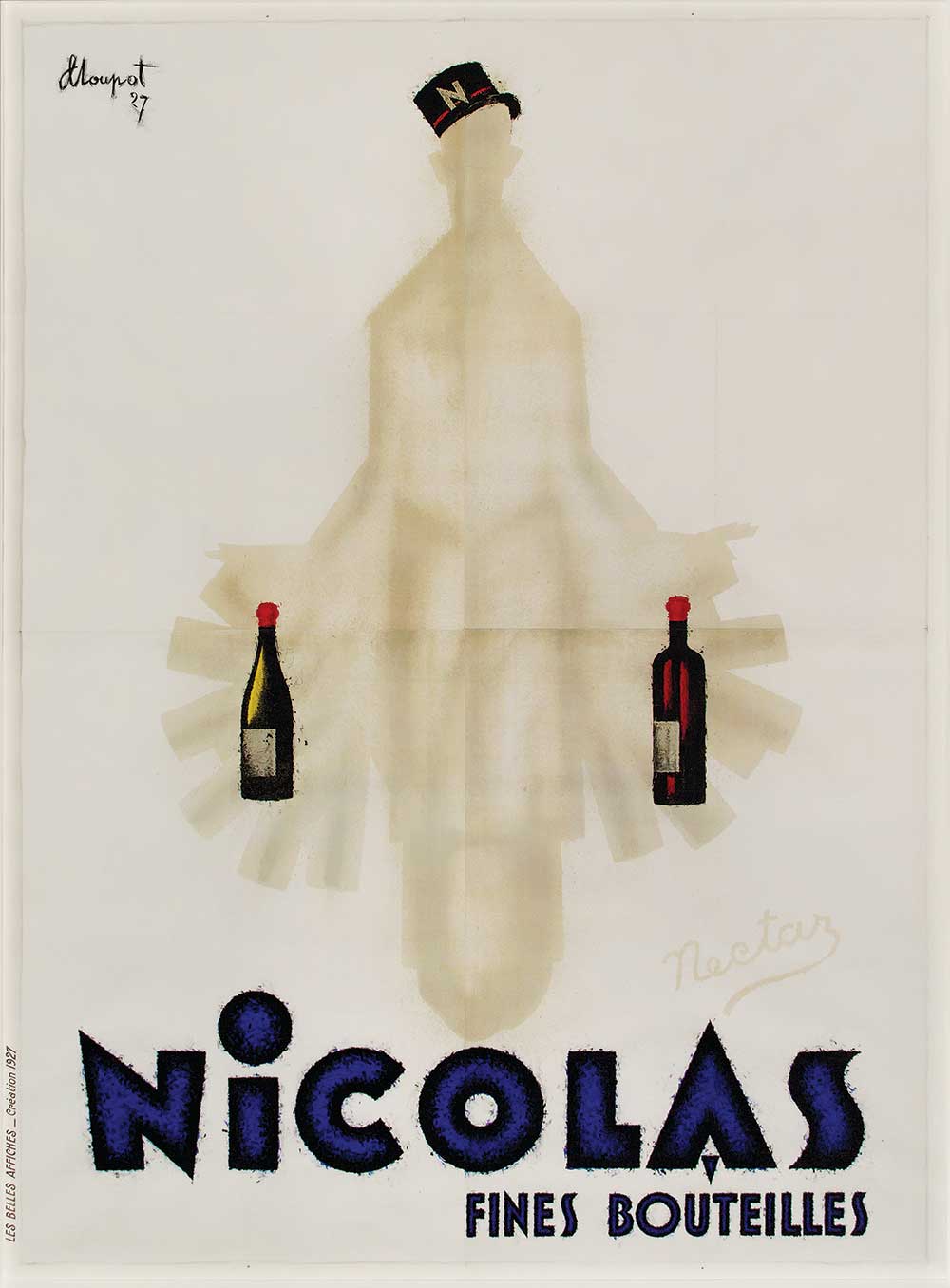 Nectar Livreur – Nectar the delivery man – was a fictional character created by the artist Dransy (George Isnard) for the wine company Nicolas in 1922. A comical, slightly ludicrous figure, Dransy’s designs were an immediate success, and Nectar would be used by the company for nearly half a century. Following Dransy’s departure from the brand, the director Étienne Nicolas decided Nectar needed an Art Deco make-over, in order to ensure the character’s continued relevance. In 1927 he approached Loupot, by then one of the most high-profile poster artists in Paris, with the task of modernising the brand. Loupot added a gentlemanly tail-coat to Nectar, turning the figure ‘high-class’. In this design, Loupot has smudged out Nectar into a mere shadow, superimposing two bottles of wine (one a white wine from Burgundy, one a red wine from Bourdeaux) and his iconic hat with the ‘N’ of Nectar and Nicolas. 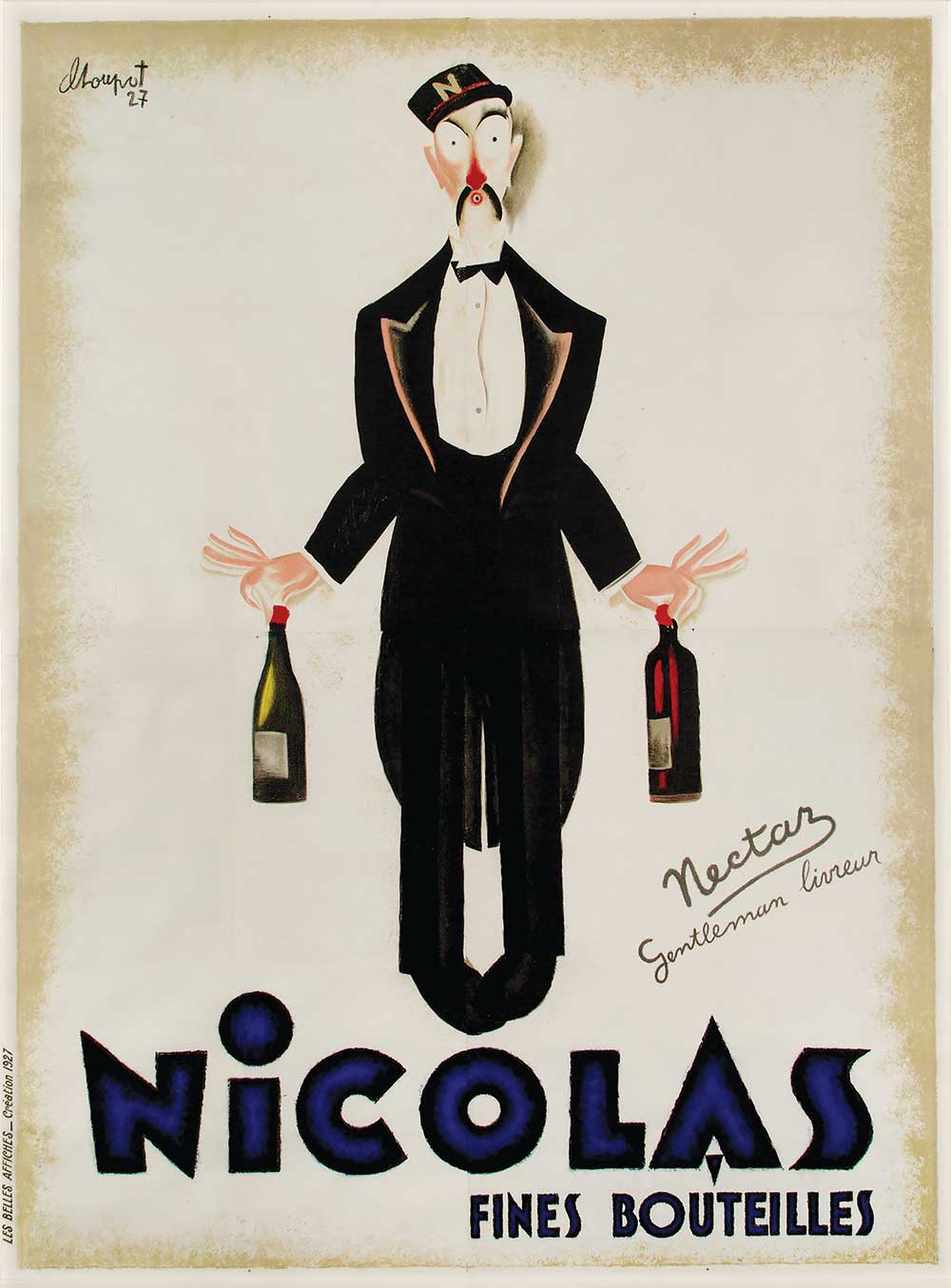 Loupot produced many versions of the Nectar figure for the wine retailer Nicolas. Here, the character is placed in a comical position, as if having just been discovered secretly taking wine. The bottles are held precariously by his finger tips, and his red nose suggests that he has perhaps imbibed some of the wine himself. Toes turned inwards, mouth opened into an ‘o’, this is the iconic figure of the Parisian delivery boy turned dishevelled. 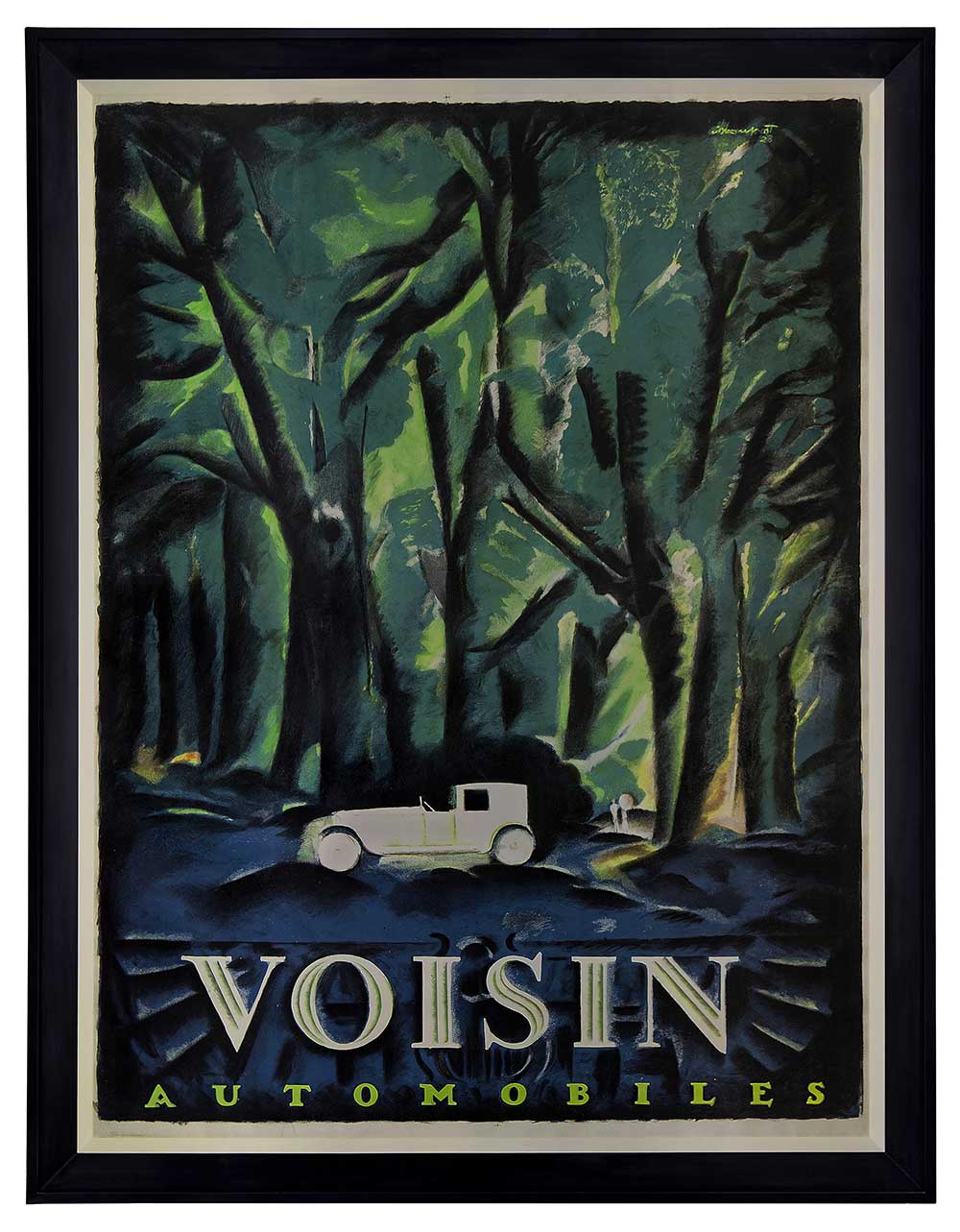 The poster that launched Loupot’s career, and established him as one of the leading lights of the new poster generation. One of two images produced for an automobile company, this version draws on the work of Paul Cézanne, whose paintings had inspired a generation of artists following an epochal retrospective exhibition in 1907. Where Cézanne would omit human presence, Loupot inserted a machine of luxury and elegance: the racing car. A version of the bucolic scène galante, in which men and women elegantly repose in nature, here the figures have been replaced with the symbol of the new, the automobile. The dreamlike scene also borrows from Expressionist aesthetics; the elegant car is not drawn with precision. Loupot instead evokes the myth of the automobile.

No other poster has since been able to so perfectly preserve the vigour of the inaugural dream connected to the advertisement of luxury items.