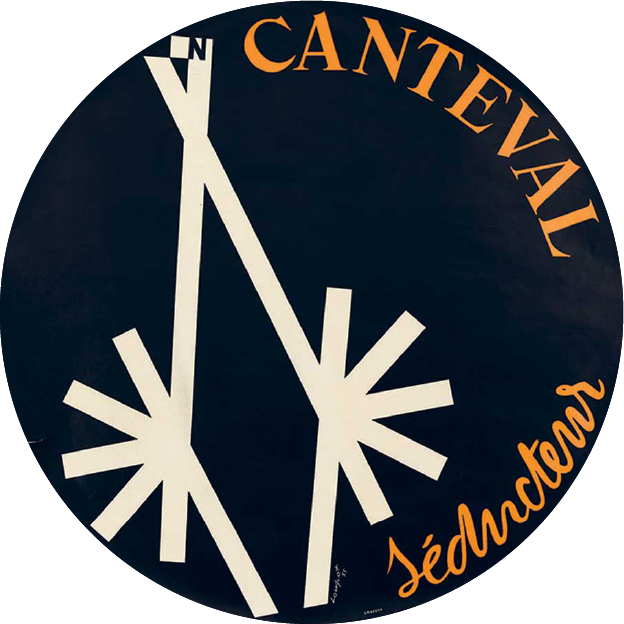 Loupot’s evolution towards a measured dynamism and total maturity is marked by its being remote from the impressionistic form and romantic expression of his youth.

In these last works, Loupot’s creations characterise themselves as more intellectual and less spontaneous. They perfectly express the spirit of the time, bearing witness to total professionalism as opposed to the amateurism of the publicity from days gone by.

The end result of this path towards the purity of form are the inventive acronyms for Air Liquide and RV (Route et Ville). Here, the artist rejects all ornamentation to return to conveying only the essential.

Loupot worked for St Raphaël from1936, an artistic collaboration under the auspice of Max Augier that would last until his death. As had been the case with his work for Nicolas, Loupot was given existing brand characters to update, this time two strolling waiters. In his initial designs the figures were kept in their original profile placement. In 1945, however, Loupot designed a radically new composition, turning the waiters to face outwards, and also designing a new letteringfor the poster. The poster was not released in 1953, due to the economic instability following the collapse of the Vichy regime (and the subsequent lifting of restrictions on advertising) in 1945. 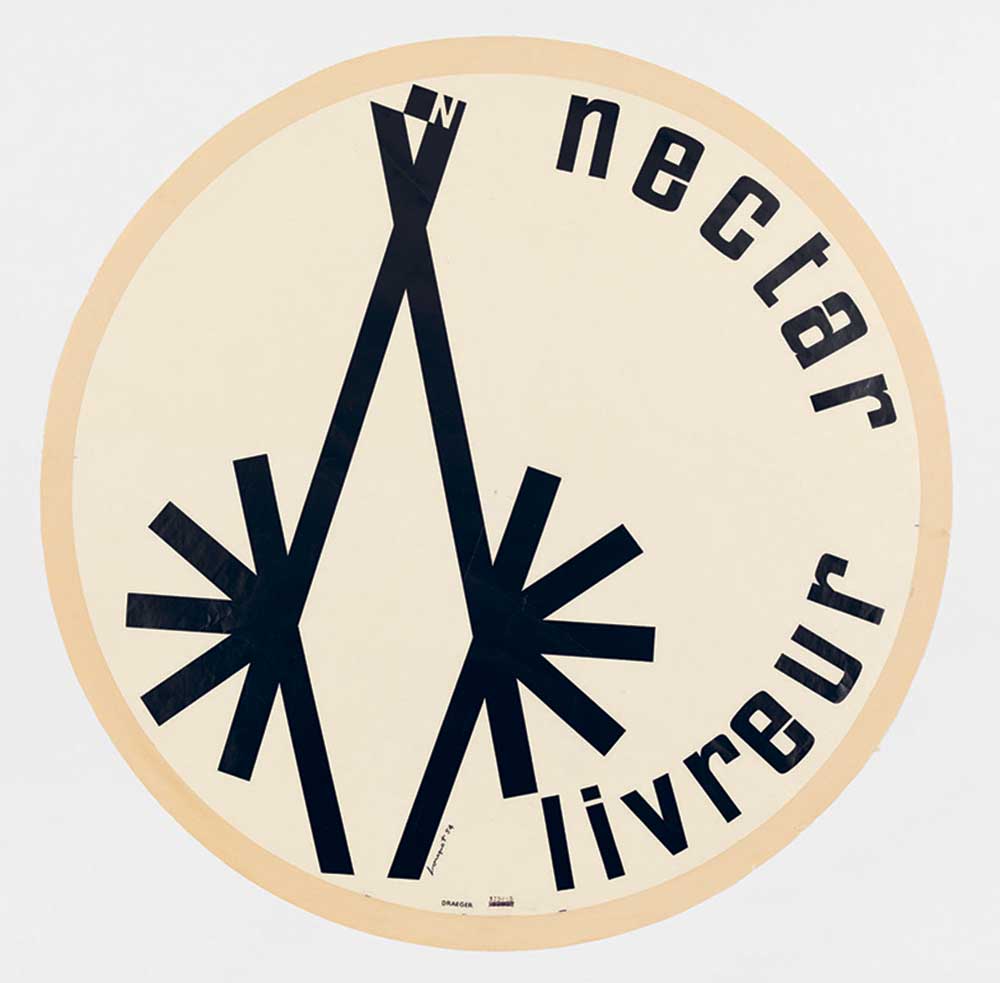 In this late commission from the wine company Nicolas, Loupot continues his experiments in graphic simplification. The humorous delivery figure Nectar that he had previously depicted for the brand is reduced to a graphic outline, the forms conveyed with ultimate economy, the splay of wine bottles in the hand now eight bold lines. The oval format of the design was not Loupot’s choice, but was to fit the back of certain buses in Paris. 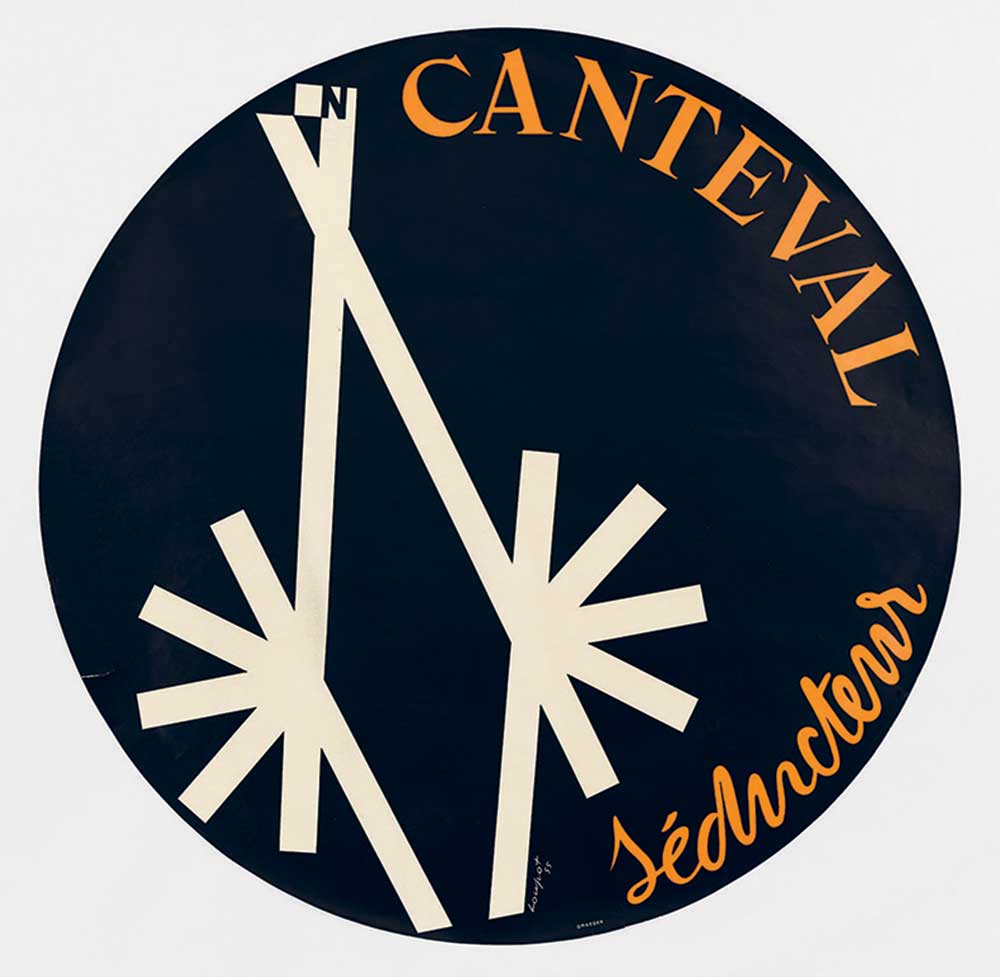 Canteval was the name of a table wine sold by the wine retailer Nicolas. Loupot had worked extensively for the company over the course of his career, during which time he had developed the iconic Nectar figure, a delivery boy carrying bottles of Nicolas wine. Nectar was nowradically simplified to merely a suggestive outline, indicative of the brand’s confidence in the instant recognisability of Nectar. Loupot had recently devised a round poster for Nicolas, in which Nectar was shown with the same semi-abstracted outline, but with a white background and black letters and outline. Here, for the table wine, Loupot invertedthe formula, adding orange letters for the new product. 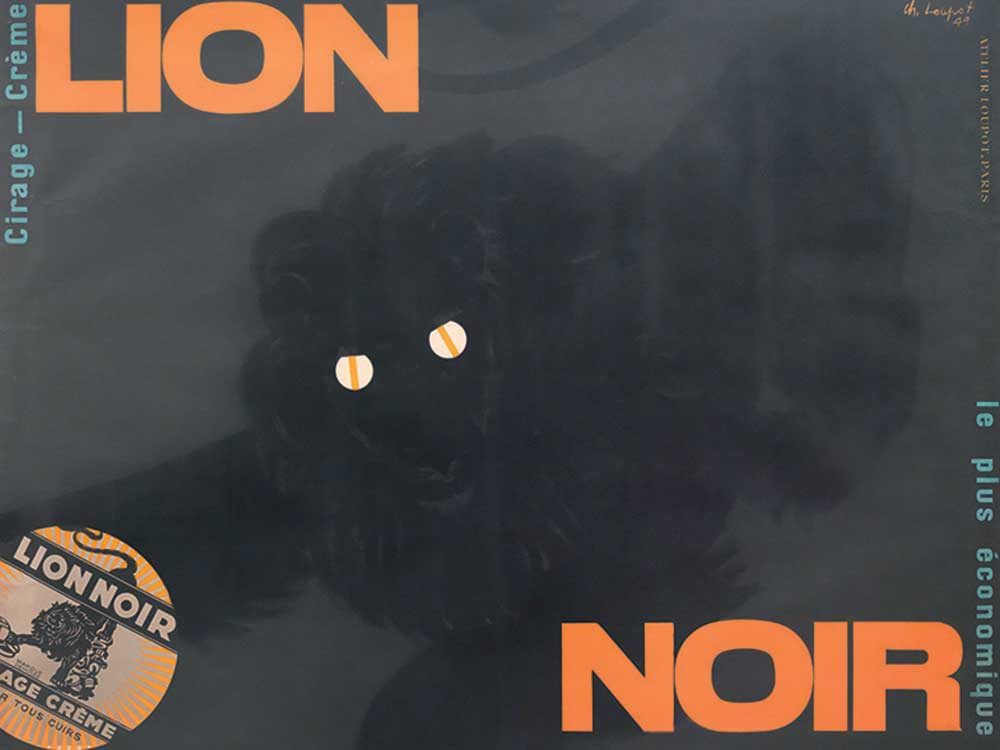 The challenge of producing an advert for a shoe polish prompted Loupot to create one of the most daring designs of his career. Using the brand’s pre-existing theme of a pouncing animal, he layered a black drawing on a black background that was visible only under certain conditions. From a distance, the poster appears to be simply a black surface with orange lettering and two white circles. As the viewer approaches the piece however, this effect starts to change, and a lion looms out from the dark. Such an effect was dependent on the lighting at hand. In the metro, for instance, the strong artificial lighting would have exaggerated the sense of the animal caught in the headlights, white eyes gleaming under the harsh glare of electric. More than any other work, this poster testifies to Loupot’s keen awareness of the poster in its urban environment. The work was not to everyone’s taste. Raymond Savignac, a poster artist in the generation following Loupot and the ‘Musketeers’, criticised the work as a piece of academic fancy. Whilst Savignac saw the work as a clever failure, the length of the campaign and the fact of its being rerun suggests that it was not quite the disaster the younger artist made it out to be. 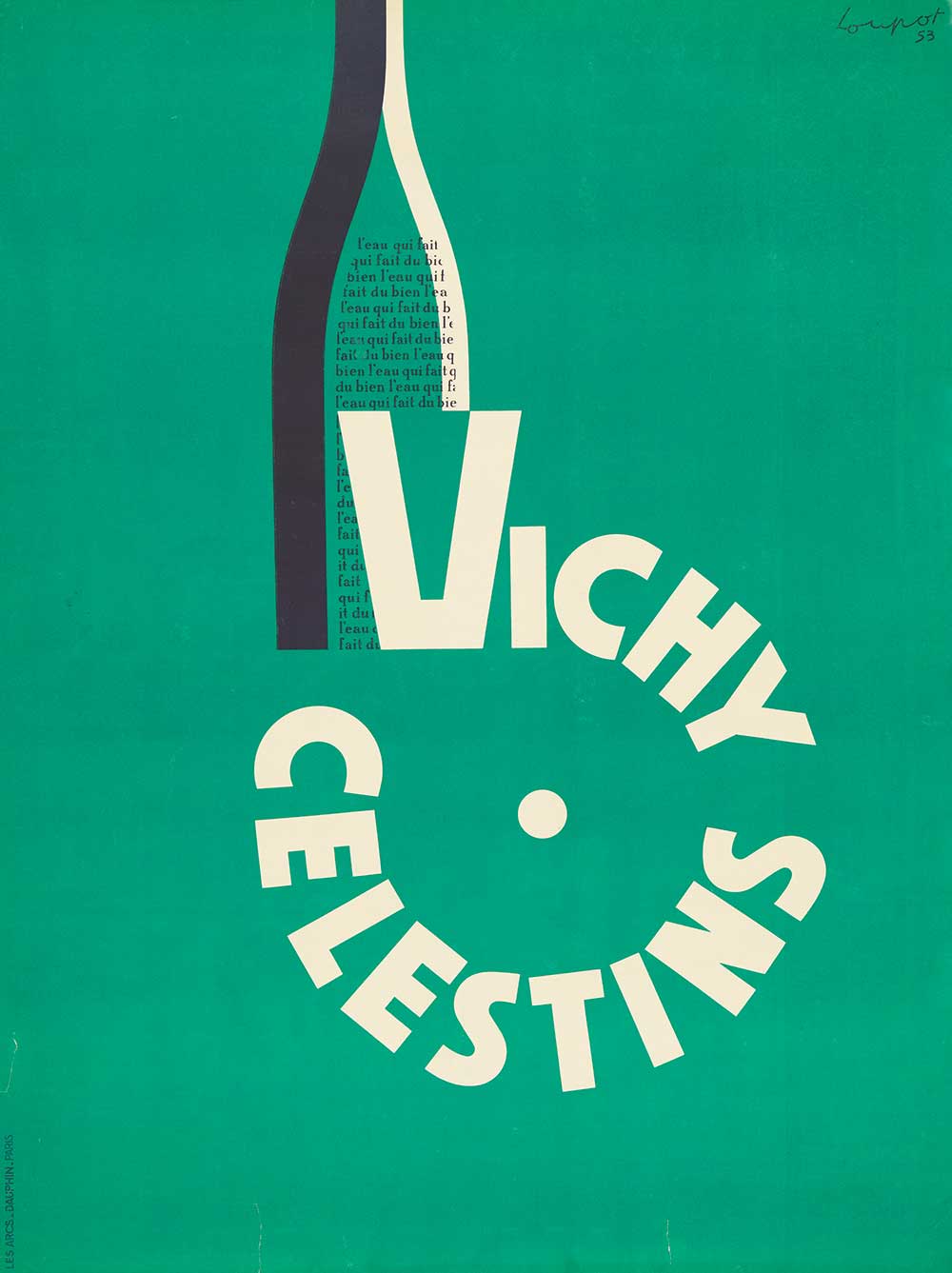 An advert for a sparkling water, in which the words ‘l’eau qui fait bien’ (water that does you good) are repeated continuously. The words lay stress on the health benefits of the product, complemented by the reduced green and white palette that is evocative of a medical environment. The credibility of the statement is validated through this mock health aesthetic, a sense of refreshment and purity hinted at through the delicately balanced design. 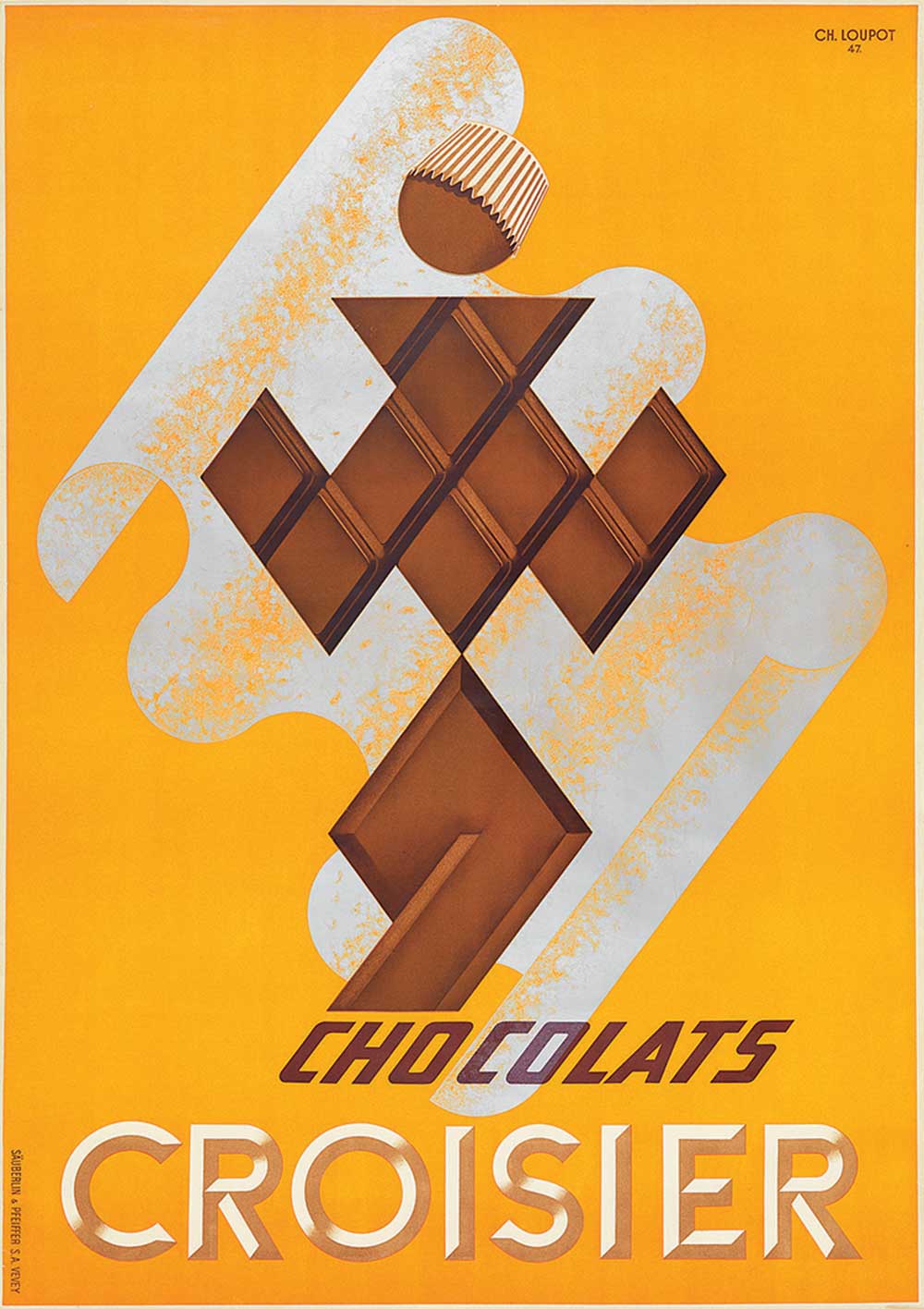 Produced for a Swiss chocolate company, Loupot used the opportunity of the commission to take up Swiss lithography, which typically used paper and ink of a superior quality to that in France.Swiss design was widely acknowledged as one of the leading forces in graphic design in the period. Loupot incorporated something of the emerging ‘International Style’ to produce a decorative reverie of a character made out of a bar of chocolate. 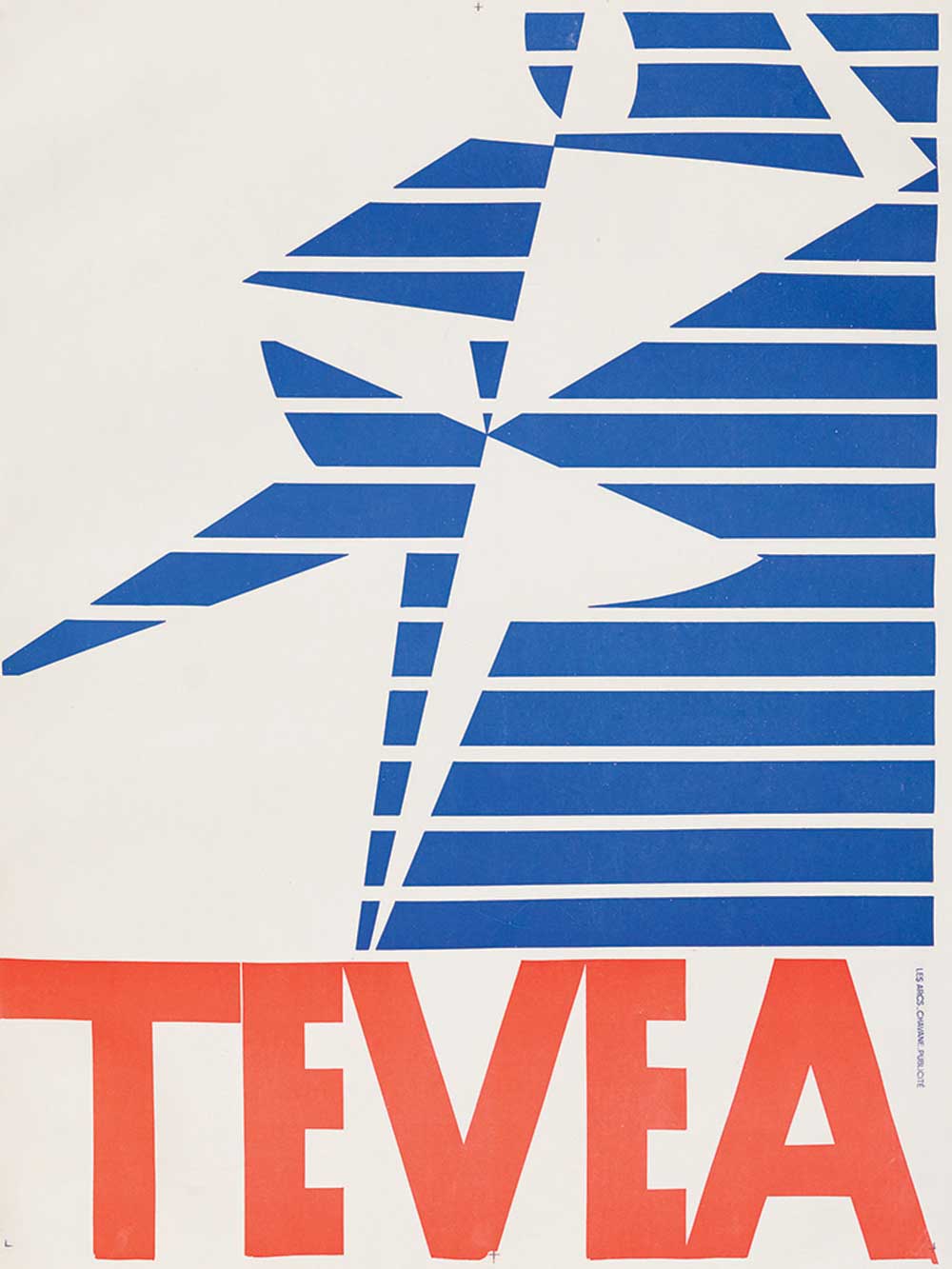 The 819-line television system, an analogue high-definition television system, was used in France following the Second World War. Highly advanced, it arguably placed France well beyond the technological reach of many other European countries at the time. Loupot played on the idea of the line in his design. A series of contrasting two-colour lines make up the work, through which a ballerina can be seen. The poster thus suggests the actual broadcasting process of the system itself.

The figure of ‘Nectar’ for the wine company Nicolas was the subject of extensive rework by Loupot. In the post-war period, he had turned the previously semi-realist figure into a piece of geometric reduction. Now, experimenting with the figure, Loupot paradoxically tries his hand at giving depth and volume to the flat shape. The figure has a shadow that is enlarged and stretched in imitation of the type of shadow produced by a tangible, weighty body. At various points of intersection, the white of Nectar turns grey, a play on the change of colour in artistic depictions of depth. 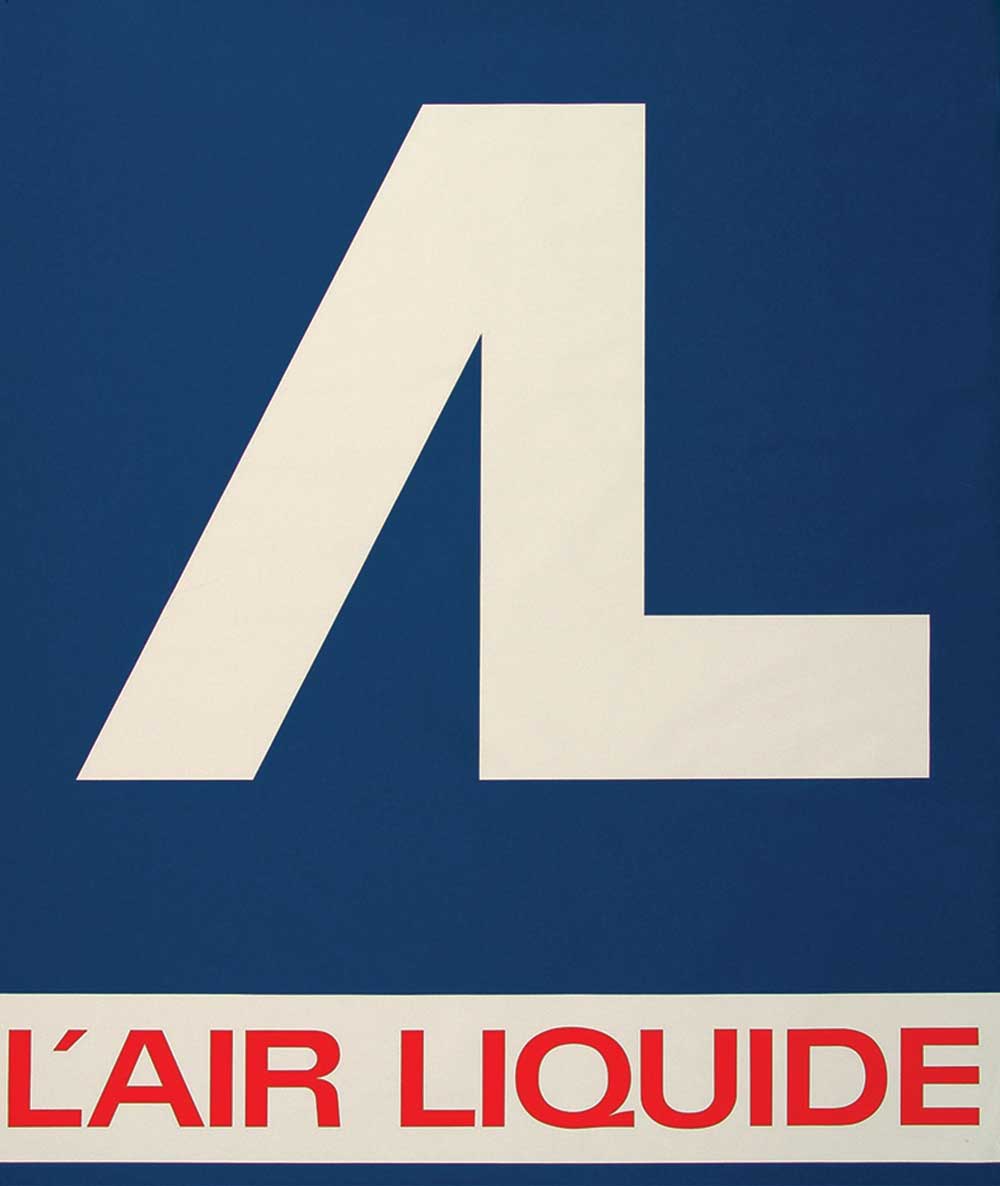 This design for Air Liquide, the French industrial gases company, was created shortly before Loupot’s death. Streamlined almost to the point of abstraction, the two uppercase letters of the company are fused together to create a single symbol that neatly conveys the liquid qualities of the company. The drawing was kept by the company until 1991, when it was slightly modified, before finally being abandoned in 2017.